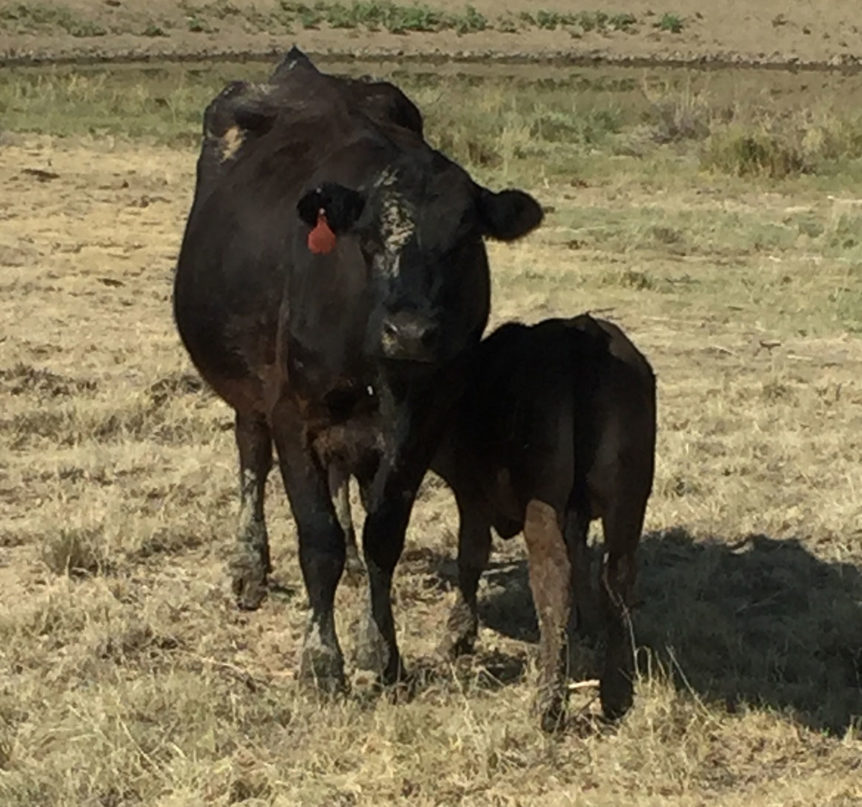 When we were in the design process for the website, we really liked the idea that we could write and post our own blogs about “Ranch Life!” I thought it would be fun to give people an insight to our world, while sharing pieces of our lives. Well, it’s been harder than I thought. What starts as a simple idea seems to morph into a much bigger project. So, the blogs about the spring calving and bull sale season, as well as the month of branding and breeding, have gotten pushed to “next year,” when I can figure out how to keep them from being the length of a novella!

Until then, I will try to focus on vignettes of our life. (See, Mom, I do remember some of my English terms!).   This blog is one such little picture of our world.

There is an arroyo down in the pasture directly in front of our house, here on the ranch. For those of you who aren’t familiar with a arroyo, it’s basically a steep-banked, narrow creek, that flows at various levels and flow, depending on the time of the year. Because of this, most of its banks are very steep — often somewhat stair-like, going down to the water. The water is very alkali and cattle don’t normally drink from it, unless its running at a pretty high level, which means fresher water from rains and/or snow melt. Alongside the narrow banks, there are many places with lots of fresh green grass, which cattle love to find. We have put in several crossings across the arroyo for the cattle to get to the other side of the pasture, and during times of higher flow, cattle will find and use these crossings. But during drought times/years, the water flow is pretty negligible, so they cross in other places, some of which are pretty muddy and boggy.

Well, with our current ongoing drought, the cattle have been hanging out down near the arroyo, finding the green sprigs of grass and crossing at will.   A few evenings ago, I heard a calf calling for his mama. This is not an unusual occurrence for the time of day — calves and cows often drift away from each other during the day, then the calls start about dusk, when the calves realize they are hungry and the cows realize their bags are full.   The same thing starts up about dawn each morning.

Anyway, I used to get somewhat alarmed at the sound of calves calling, but I’ve learned that they always find each other, so I shouldn’t stress. However, the next morning, I am still hearing the calf calling, in the same place and so I figure I should check it out. Sure enough, when I get down to where the calf is, there is his mama – stuck, lengthwise, in the arroyo.

Keep in mind, the bank is steep, the water passageway is shallow and narrow, and there is a LOT of silt and mud. So, she has gotten herself completely stuck — only her body and head are showing, with all four legs buried in mud.   She’s very tired and can hardly hold up her head, so I prop it up with a stick I find and call Bill, who heads down to the barn to get the tractor, chains and a halter.

As luck would have it, this bank is one of those areas that is pretty steep and somewhat “stair-stepped” down to the water — and the cow. So the first step is to get her out of that mud and to the first level.   Although Bill, as always, is pretty calm and analytical, I am just trying not to think about the worst case scenario(s). With a halter and several chains hooked together, we are able to keep the tractor up on the level and drag her out of the water and mud, to the narrow bank beside the arroyo. Since she is so weak, we know we need to get her all the way up to level ground. But, at least now we can get her legs out of in front of her, chain them and use them, rather than the halter, to lift and pull her up with the tractor. My job is to direct Bill and, using the halter, keep her head lifted, so that it doesn’t “hook” on a bush, which could break her neck.  (I know that from experience — a much sadder story from 20 years ago!)

All I can think of is what could go wrong! (Yes, I am a “glass, half empty” kind of person, when crisis happens!) Well, it all works according to plan, with no decapitation or broken legs ! Once we get her up to level ground, we get her feet under her and leave her sitting up, while we go get a dose of Banamine (pretty much “ibuprofen for cows”). After a few hours, she gets water and protein cake, which she is definitely ready for. At this point, I can finally breathe easy – she is going to be okay!

So, for that day and the next, she got served “breakfast in bed” and rested, while her calf STRONGLY encouraged her to get up, so he could nurse. Yesterday evening, she was up and heading to the other cows with her calf. Here she is this morning – looking a little muddy and a little hollow and dehydrated, but overall, a WIN! In our world, we always feel pretty blessed when we have a good ending to a potential sad story.